Over the past six months bassist Steve Hanley and drummer Simon Wolstoncroft have both released books on life in my favourite band, The Fall, and there’s another one due next year from Brix Smith-Start.  Brix, Hanley and others have also started playing gigs as The Extricated, delivering convincing renditions of old Fall and Adult Net songs.  I wish nothing but good fortune to these folks, who have all played significant roles in creating a body of music which has enriched my life. But I do have mixed feelings about where this is heading.  My 2009 review of the book that kicked it all off might help explain why…

Mark E Smith has been keeping the music press supplied with choice anecdotes for many a year, but interest in his behaviour (as opposed to his music) seems to have ramped up quite considerably of late, fuelled in part by his mid-90s excesses and, more recently, his notorious TV appearances on Newsnight and Football Focus, which garnered amused respect from folks who care not a jot about his band The Fall.

And in theory there’s nothing to halt the ongoing rise in MES-mania, as the stories that make it into the media are just the tip of the iceberg. (You’ll be aware of this if you’ve ever encountered the man or know anyone who’s had the pleasure of his acquaintance). So how long before we have newspaper columns, monthly magazines and entire TV channels devoted to his exploits?

For now, we have The Fallen. This is the story of music journalist Dave Simpson’s two year quest to track down and interview as many ex-members of The Fall as possible, originally for a four page Guardian article. For who better to spill the beans about MES than the men and women who worked for him? Indeed, for many music journos the rapid turnover of Fall musicians is the most visible and fascinating manifestation of Smith’s eccentric behaviour. The fact that the quality of The Fall’s music is seemingly immune to lineup changes seems to be particularly confounding for them. The Fall look like a rock band and yet they aren’t.

This sense of bafflement is captured in the paperback edition’s sensationalist tagline: ‘Life In and Out of Britain’s Most Insane Group’. Simpson puts it more grandly in his introduction: it’s ‘a piece of social history: 30 years of music seen through the eyes of the foot soldiers’. Which description is the most accurate? I’m still not sure.

Fall fans have pieced together a lengthy list of said foot soldiers on the band’s unofficial website, but even that’s doesn’t give the whole picture. Without even trying I’ve met two people in different walks of life who claim to have played keyboard for The Fall, neither of whom are mentioned on the website or in the book. Are you among The Fallen too?

Given the scale of the challenge he sets himself, Simpson does as well as anyone could reasonably hope for, interviewing almost all of the significant figures, plus many others who passed through the band briefly but whose stories are revealing or at least entertaining. I’m pleased to report that my personal favourite Fall anecdote (or a variation on it) is present: the story of how Smith, frustrated with slow progress being made at a mixing session, threw his producers off the desk, arranged the faders in a smiley face and said ‘that’s how we’re mixing the track’.

There’s lots here that is laugh-out-loud funny: the chapter on keyboard player / producer Simon Rogers’ time in the band is especially chucklesome. But whilst The Fallen plays the ‘isn’t MES a crazy feller?’ card for all it’s worth, it is at least honest about the impact of Smith’s more destructive and perverse actions, and it does make some interesting if not particularly original observations about Smith’s approach to getting the best out of his band.

But whilst I can usually hoover up as much information about The Fall as the day will allow, I came close to being defeated by the book. About half way through it started to feel rather empty and unedifying, like a very, very long version of those Mojo one-pagers where musicians talk about how they joined a band and how they left, but all the most interesting and productive stuff in the middle is skipped over. For me, initial admiration for Simpson’s persistance and devotion to his task turned to wonder that he managed to get so little out of most of the people he encountered. It’s no surprise that the famously reticent Craig Scanlon would have little to say, but he’s by no means alone. And when long-serving members of the band like drummer Simon Wolstencroft come away with a few unrevealing pages, it starts to look like Simpson isn’t a very capable or sympathetic interviewer.

I wonder if some of The Fallen took Simpson for a chancer, out to ride the wave of interest in MES, and clammed up accordingly. The book may amount to a big group ‘kiss and tell’ session, but its subjects are not, for the most part, bitter and have no axes to grind. In fact they’re almost universally loyal to their former boss, irrespective of any personal gripes they may have him, which is possibly the most heart-warming revelation in the book. As it makes clear, they value the framework and creative encouragement he gave them as well as the opportunity to be part of something special.

Whatever Simpson’s real motivations, a problem manifested in the book is that he only seems to be interested in his interviewees in so far as they can tell him about their boss. There’s a token amount of biographical chat, but the subject soon turns to and stays with Smith, and the book ends up being the worst of both worlds: unsuccessful as a portrait of Smith and unsuccessful as a portrait of his band members. You get little sense of what they did between tours or albums, how they came up with their contributions to Fall songs, or how they went about their collaborations with each other. Sure, Simpson has a lot of ground to cover, and the book is aimed at a casual audience who may not want to know intimate details of every recording session or fist fight, but there must be a more interesting and informative middle ground than he achieves here.

As for Smith, perhaps trying to work out what makes him tick is the real fool’s errand here. Simpson himself concludes that he hasn’t got much closer to knowing the man: ”Like Macavity, The Mystery Cat, the more you try to pin Smith down, the more he slips away”. And given the limitations of Simpson’s approach, we can be thankful he set some limits to his task. If he had kept going and interviewed Smith’s best mates, accountant and postman (who, after all, says Smith’s house is like the bleeding bank of England) it’s not likely that he, or we, would be any the wiser.

Undeniably The Fallen does add plenty of detail to the picture of the band sketched in recent biographies by Simon Ford and Mick Middles. And, given as Smith is to fantasy, exaggeration and self-congratulation, The Fallen should, in theory, be a useful as an objective counterpiece to Smith’s autobiography, Renegade.

But the difference between the two books is instructive. For all the half-informed taxi-driver-rant style of Smith’s book, I found it unexpectedly moving. Smith may be a habitual liar and he is unsentimental to a fault, but he’s also full of ideas and optimism and I came away from Renegade inspired and excited about life, music and creativity. The Fallen just left me depressed.

That’s partly because Simpson’s book ends on a major personal down beat, his obsession with The Fallen eventually causing his long term girlfriend to walk out. In itself this isn’t particularly noteworthy – it’s not the first time a workaholic has alienated his partner – but it somehow becomes pathetic when Simpson tries to weave it into the myth of The Fall. He relates the tale of how Smith berated a particularly annoying journalist with the words, ‘I fucking curse you. You’ve got the Curse of The Fall’. Two days later said journalist had a near-fatal car accident, in just one possible manifestation of Smith’s purported psychic powers. As Simpson proceeds through his journey, he half-jokingly wonders whether Smith has cursed him too. Following the split with his girlfriend, his own car accident, and various other disasters which befall him, he concludes that he too has fallen victim to The Curse of The Fall.

By this point the book has goes seriously awry. Having failed to carve his way into Mark E Smith’s head, Simpson turns his blunt scalpel on Fall fans and himself, asking ‘why are there no Fall ‘fans’, only Fall obsessives?’, and suggesting that obsession with The Fall is a product of a deep psychological flaw: ‘It’s as if we all have a crack in our psyches or a scar in our experiences that makes us susceptible to The Fall’. But he’s wrong about Fall fans: yes, of course I would say that, and many are obsessed, but there’s also plenty of people who like and respect the Fall but whose obsession goes no further than attending a gig or buying a record every few years.

And he’s also wrong to try to treat obsession with The Fall as if it’s a medical condition. With 30 years of intensive and radical music-making behind them, The Fall represent an important contribution to our culture. And with Smith defying all predictions of demise (physical or creative), they’re the band that keeps on giving. They’re worth devoting time to, even obsessing over.

But obsession can take many forms. You can dwell on Smith’s behaviour and try to work out what makes him tick, as Simpson does, or you can get to grips with the messages which are encoded in Smith’s interviews, his approach to making music, and the music itself. Simpson seems fully aware of this side of The Fall, but in an entirely passive way; as a gobsmacked onlooker rather than engaged participant. None of what Smith has to say about imagination, change or self-determination seems to have rubbed off on him.

Two decades ago, in the song ‘Dice Man’, Smith outlined his personal attitude to risk (‘balls on the line, man’) and challenged to his audience to follow suit: “Do you take a chance, fan?” I’d argue that The Fall’s music is one big challenge to engage with Smith’s ideas: to learn from them, integrate them into your life or improve upon them, or to reject them and go your own way. And to obsess about Smith the man – or his band – is to miss the point.

In this light, Simpson’s imagined Curse starts to look like a self-fulfilling prophecy. And from where I stand, there was no need for Mark E Smith to lay that curse on Simpson, he laid it on himself. 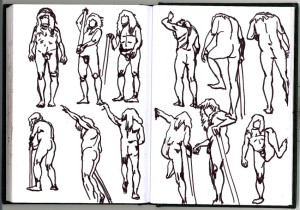 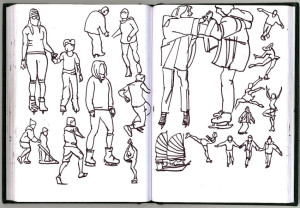 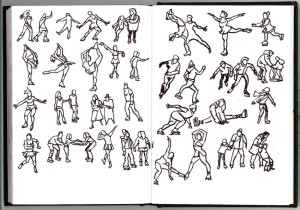