Mystery Dick return to the stage next month, as part of the aural detritus 2016 concert series. Our last performance at aural detritus in 2012 was released on CD-R as In The City of Violent Giants.

Also on the bill: YOAF, Hákarl and Tim Yates and Tom Fox. 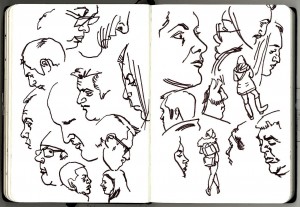 Matadors drawn straight and then exaggerated for the Twitter #figurejuly challenge…